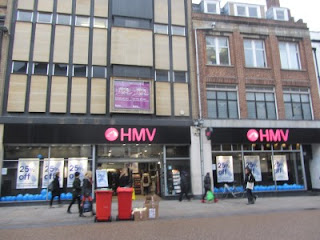 I did pop into HMV for what could be a last look round the shop that once faced the Virgin Mega Store across Cornmarket. How are the mighty fallen.

The Guardian reported today “Thames Valley police confirmed that they had been called to an incident at an HMV store in Oxford after a dispute over a gift card between two customers and staff. Holders of gift cards are particularly frustrated as HMV continued selling them and vouchers after warning investors on 13 December that the group expected to face a solvency crisis by the end of January.”