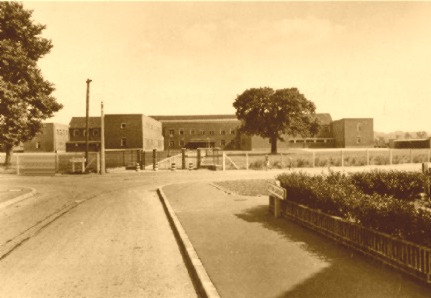 Our school coach used to bring us from Bletchingly and Nutfield and drop us at the school gates. The boys’ playground to the left of the school was surrounded by high wire fences to protect the windows. The only football allowed was with a tennis ball. Sometimes the ball would get kicked onto the flat roof above the cloakrooms or into a garden area, and whoever kicked it would try to retrieve it. If caught they would be taken in by prefects or staff on duty and sit outside the headmaster’s room.

Our Headmaster was Mr Jones – known as Taff because he was Welsh. He was strict. He made headlines in the Sunday Mirror once for making all our year scrub the toilet walls after somebody had made black marks all over the new paintwork. Two boys from Bletchingly refused and were expelled.

I saw fights that shocked me in my first year. Whenever a fight broke out pupils would chant ‘fight fight fight’ and gather round. The staff and prefects on duty would usually haul the culpits to the headmaster.

I remember an incident on that patch of grass on the right of the picture when the coach was late. Some of the others had taken my bag and were throwing it from one to the other. Failing to get the bag I went for one of the throwers and we went tumbling to the grass. I remember falling awkwardly, and then the rest of the group jumped us.

I hobbled home after getting off the bus. At the East Surrey Hospital in Redhill I told the doctor that I tripped over a kerb. It turned out not to be sprained as usual, but to be broken. So back at school a few days later I had crutches and a plaster cast and some car tyre as a sole