On the war memorial in top Nutfield are many familiar village names and the words “Lest we Forget” our men of Nutfield.

“It is with much .sorrow we record the death of Pte. Albert Edward Joiner (“Bert”), aged 19 years, late East Yorks Regt., second and dearly loved son of Mr. and Mrs. G. A. Joiner, 29, Trindles Road. South Nutfield, who was killed in action in France on the night of Sept. 3rd, by a machine gun bullet. It was a relief to know he did not suffer any pain, as was killed instantaneously.

Showing a keen interest in gardening he entered the gardens at Nutfield Priory shortly after leaving school, and stayed there until the time of joining the Colours.

Pte. A. E. Joiner was a member of the Nutfield C.L.B., a very persevering boy, possessed of a very cheerful disposition, refined, and was greatly beloved by all who knew him.

On joining in May, 1917. he was placed at Dover in training battalion, from there he went to Bridlington, in Yorkshire, at that time being the East Riding Yeomanry. In February he was sent to Ireland, where he remained until July, and was then drafted to France, and afterwards transferred to the East Yorks Regt.

Mr. and Mrs. Joiner have received many letters of condolence and sympathy, for which they and all members of the family are deeply grateful. The Chaplain from the deceased’s battalion wrote: “Bv the time this letter gets to you you will have heard the sad news of your boy. Pte. A. E. Joiner. He was killed by a machine gun bullet on the night Sept. 3rd. and the next day we buried him in a British cemetery. We put flowers on his grave, and intend to erect a cross. The news will have come as a cruel blow to you. May God help you to bear it. You must always be proud of your boy. He died bravely doing his duty. Now he is away from the hardship and horror of war, and, I know, would not have you grieve too much for him. His comrades join with me in this sincere expression of sympathy with you.”

Thanks to the https://www.britishnewspaperarchive.co.uk and Surrey Mirror for this tribute. All Rights reserved

Not much of the former hospital of St Lawrence’s now remains. A plaque has been put up by The Bourne Society on what was the main gate post.

Beyond that is the new housing on the ground of the former hospital. The road names off St Lawrence Way remember people associated with the hospital: Deacon, Straw, Danvers, Gwynne, Bunce, Drew, Pye, Marcuse. Joey Deacon was well known beyond the hospital.

Beyond the housing the land dips away to an open area, and a tree covered walk in the valley – Green Lane, and beyond that is Surrey National Golf Club.

Old postcards show how the front entrance looked when the building was big enough to house 1,500 and more people from the Metropolitan area of London, and when the hospital was the largest employer in Caterham.

The postcard was written by the mum of Bessie to an aunt saying – this is one of the views of the place where Bessie stays, and she hopes you will write to her.

What has been kept as a screen for the new estate are high trees, the fence and gate posts – once intended to keep people in and now to keep them out.

The admin block was attractive (seen in this 1923 picture by G Aschinger).

Beyond that there was the male side and the female side with the utility corridor connecting them, off which came the kitchen, the pharmacy, the laundry, the swimming pool, recreation hall, tailors shop, dentist, and everything needed to keep a hospital community going.

It was a large hospital built to keep the cost per patient down and had no great architectural merit. The grounds were extensive. It was bulldozed rather than converted, when the era of Victorian Mental Hospitals ended in the 1990s. The residents were rehoused in smaller units by the 1990s Lifecare NHS Trust.

In 1982 Noel and Maureen moved to Caterham in Surrey and set up an antique business called the Loft at 46 Westway.

Noel used his photographic talents in the business and that became the main money earner. He took passport photos of many of the residents of St Lawrences Hospital at the far end of the Westway. The snowy picture by Noel is one of the many on his walls in his shop.

Noel was once an adventurer and rally driver who started life in New South Wales, and spent time in Papua New Guinea, and other antipodean locations until coming to Caterham with Maureen, and his growing family.

Next week Noel and Maureen close up shop in Caterham after 36 years to move to somewhere new, and a time to enjoy full retirement. 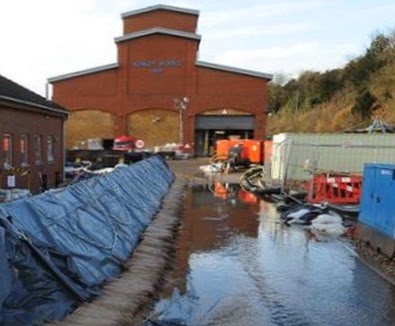 Politicians went down from London to Kenley to view the floods that were in danger of engulfing the water treatment work this week. 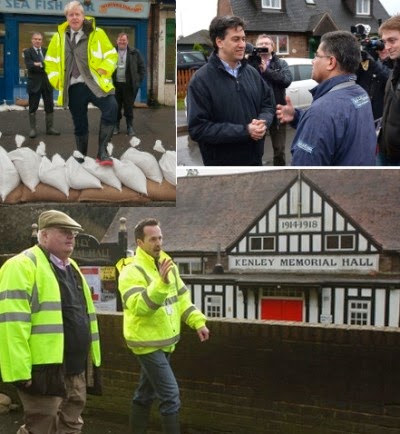 A nearby school was evacuated and its playing field acted as a flood plain. Sand bags and other barriers constructed, and pumps brought in to save a vital facility. Boris Johnson(Mayor of London), Ed Milliband (Labour Leader),and Eric Pickles (Minister for Communities) wentdown to show support, and leadership in what could have been a messy situation if things had got out of control. 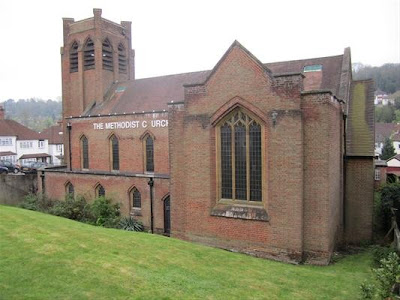 “After much exploration and prayer, at the Church Council held on 25 February 2012 the Church resolved that it would cease to function as a local church after 25 November 2012. Moving On was the theme for the last service held at Kenley and Purley Methodist Church on Sunday, 25 November 2012. It was wonderful to see the church packed, and to hear the memories of over 100 years of witness and service in that place.” 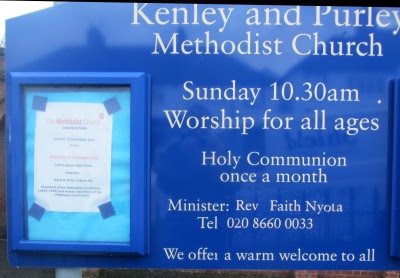 I had a friend who said her mum and dad went to this methodist church but that they were an ageing shrinking congregation. 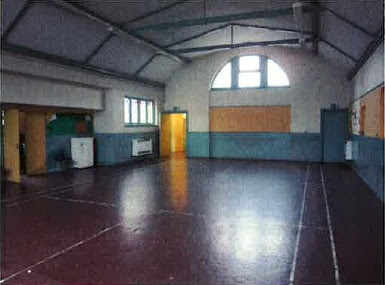 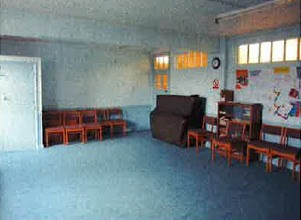 Not just loosing a church but also a community space.

I recently signed up for Friends reunited, and uploaded an old class picture from when I was 8 or 9. And these are the interesting things (for me anyway) I’ve found from other people… 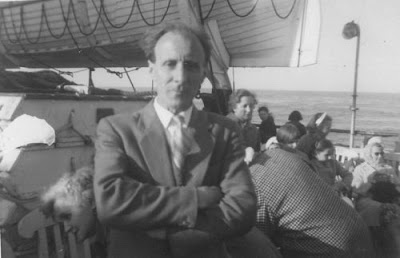 A picture of Mr Hopkins our English teacher from about aged 13 to 15. His comment on my first essay in his class was “5/10 : All very sad. Your story is too breathless to make much sense”.

The next one was “8/10: A lively imaginative piece of work.”

But a little later…”At present you are trying too hard for the unusual word and your writing is strained. However I expect you’ll come to terms with it.’

Here are some pictures of Netherne Psychiatric Hospital, near Coulsdon in Surrey, as it looked around 1977. 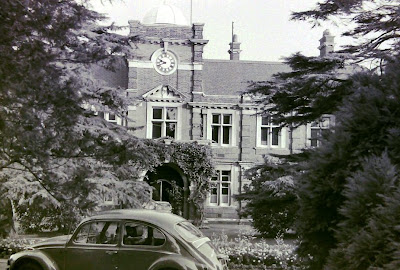 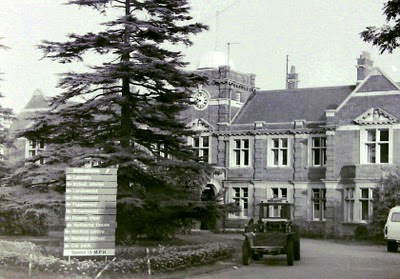 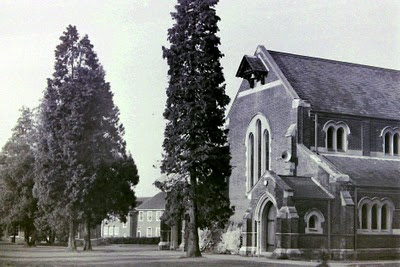 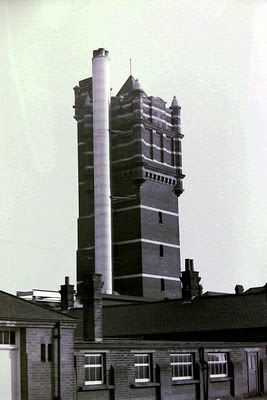 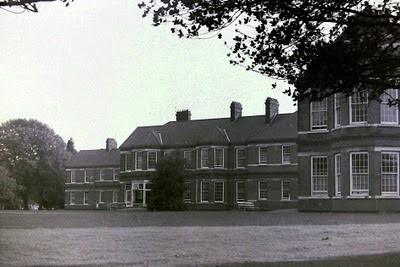 A view of the Wards.

Netherne Hospital opened its doors on the 1st April 1909.

Prior to 1840 patients from Surrey either got sent to Bethlem or a private asylum. In 1840 Wandsworth Asylum was built to accommodate Surrey patients; a second asylum was built at Brookwood, and a third at Cane Hill, but when London expanded to take over a large area of Surrey south of the River Thames, Cane Hill was used for London residents. Then as Brookwood filled up and was no longer large enough for Surrey it was decided to erect a new asylum at Netherne on a farming estate on a hill two miles from Coulsdon. 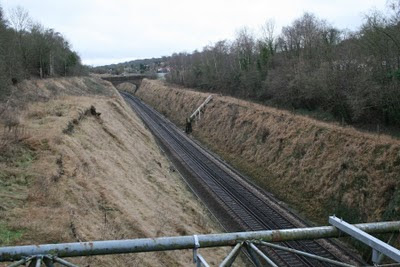 The direct path to the Asylum was quite steep and crossed high above a railway cutting, and so a zig zig road was constructed up the hill for vehicles.

Netherne was initially designed for 960 patients, but with plenty of room to grow. The main building itself was in the shape of a south facing arc so that all the wards could get the sun during the day. It was unlike previous Victorian custodial style asylums, and built of pale red brick and portland stone on two levels. There were villas separate from the main hospital to give some chronic patients – who worked on the land, and convalescent patients – ready to be discharged, a less institutional type of place to live. There was also a chapel, admin block, recreation hall, accommodation for nurses, and a cemetery. The whole estate was about 350 acres, and employed patients on a farm which included cows for milk, and a piggery with about 120 pigs to consume the food waste.

Thanks to the Surrey Mirror of 9th April 1909 for some of the details. 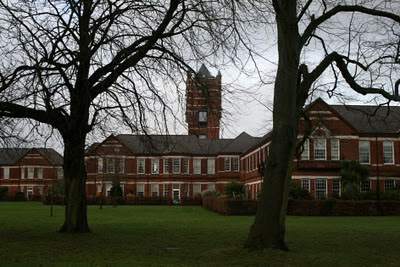 Yesterday, I drove my son over to Croydon. He had to be at work on Boxing Day and transport was a problem. Then being near my old haunts I went to what was once Netherne Mental Hospital and took this picture of what was once Dickens Ward. The view is little changed. The hospital buildings have been changed to flats, and new houses built all around. The new development is probably about ten years old now, and continues to grow with new houses and is called Nethern Village or Netherne on The Hill. 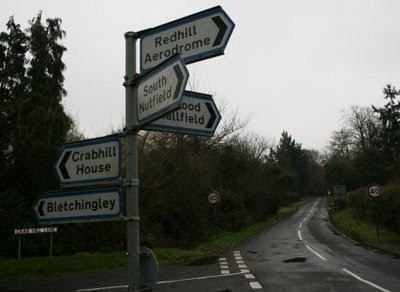 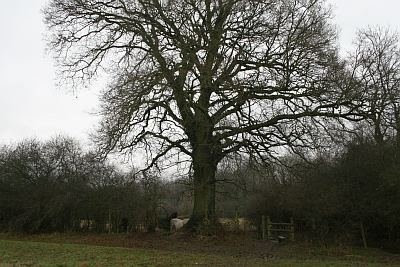 This is an oak tree I have photographed many times in the past, but not for twenty or more year. I used to walk past it every day walking Kip – the dog I had back then. The shape of the oak has not changed much in all that time. But it must have grown. There are horses and ponies sheltered under it now. There were cows in my day, and then sheep. 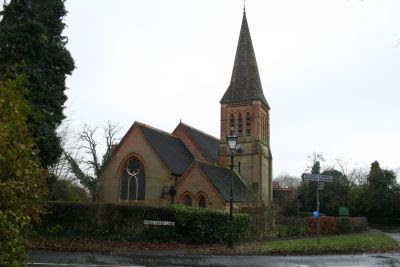 On Christmas Eve we used to go from the Station Hotel pub to Christchurch, and sing the carols too loud. We used to get looks from a lady in the choir.

Laylines are supposed to meet at Christchurch, according to one internet site?