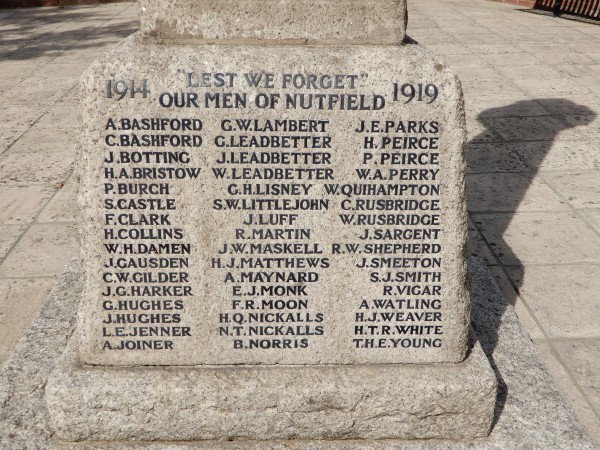 On the war memorial in top Nutfield are many familiar village names and the words “Lest we Forget” our men of Nutfield.

“It is with much .sorrow we record the death of Pte. Albert Edward Joiner (“Bert”), aged 19 years, late East Yorks Regt., second and dearly loved son of Mr. and Mrs. G. A. Joiner, 29, Trindles Road. South Nutfield, who was killed in action in France on the night of Sept. 3rd, by a machine gun bullet. It was a relief to know he did not suffer any pain, as was killed instantaneously.

Showing a keen interest in gardening he entered the gardens at Nutfield Priory shortly after leaving school, and stayed there until the time of joining the Colours.

Pte. A. E. Joiner was a member of the Nutfield C.L.B., a very persevering boy, possessed of a very cheerful disposition, refined, and was greatly beloved by all who knew him.

On joining in May, 1917. he was placed at Dover in training battalion, from there he went to Bridlington, in Yorkshire, at that time being the East Riding Yeomanry. In February he was sent to Ireland, where he remained until July, and was then drafted to France, and afterwards transferred to the East Yorks Regt.

Mr. and Mrs. Joiner have received many letters of condolence and sympathy, for which they and all members of the family are deeply grateful. The Chaplain from the deceased’s battalion wrote: “Bv the time this letter gets to you you will have heard the sad news of your boy. Pte. A. E. Joiner. He was killed by a machine gun bullet on the night Sept. 3rd. and the next day we buried him in a British cemetery. We put flowers on his grave, and intend to erect a cross. The news will have come as a cruel blow to you. May God help you to bear it. You must always be proud of your boy. He died bravely doing his duty. Now he is away from the hardship and horror of war, and, I know, would not have you grieve too much for him. His comrades join with me in this sincere expression of sympathy with you.” 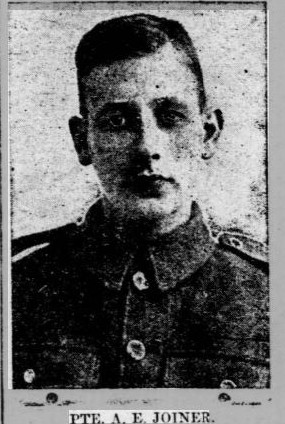 Thanks to the https://www.britishnewspaperarchive.co.uk and Surrey Mirror for this tribute. All Rights reserved